the Bartram Trail, from Jones Gap

On June 17, I finally hiked on the Bartram Trail west of Highlands, along a high ridge and across peaks that included the particular focus of my interest, Whiterock Mountain .   I accessed the Trail from US 64, Turtle Pond Rd., and Dendy Orchard Rd.,  which takes you to the ridgetop and a trail entry about 1/4 mile south of Jones Gap.  Fortunately, I was accompanied by Baron Holmes, a hiking friend who knew those back roads much better than Google Maps, which was worse than useless — another example of locations in these mountains (including my own home) that you can’t get to using that app.

We hiked around Jones Knob, took the side trail to the Whiterock Mountain overlook, then the Bartram across Little Fishhawk, and finally up a short (but very steep) side trail to the summit of Fishhawk Mountain.  The total hike was 6.8 miles round trip.  It is mostly in woods, but with several nice overlooks along the way, courtesy of steep, exfoliated Rabun pluton cliffs.

This note will discuss the geology I encountered along this short-but-striking section of the Bartram Trail. 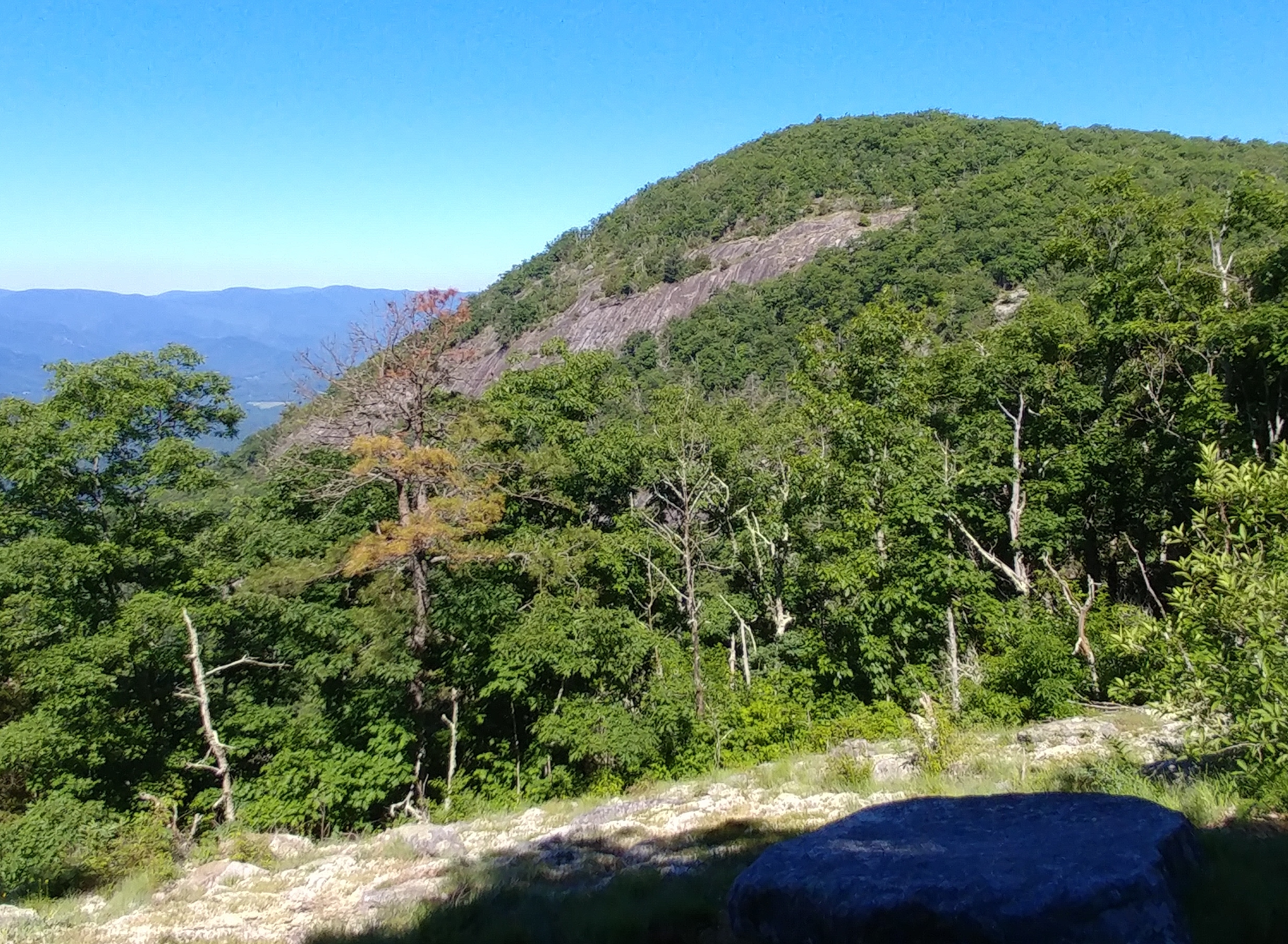 Figure 1.   Whiterock Mountain, seen from an overlook along the Bartram Trail south of Whiterock Gap.  The rounded top and bare lower cliffs (often, as in this case, southwest-facing) are characteristic of plutonic exfoliation domes.

The Rabun pluton intruded the Ashe Metamorphic Suite (AMS) country rock approximately 335 MYA.  Post-dating the period of peak metamorphic conditions (roughly 450 MYA), the rock does not have the gneissic character often found in the 465 MYA Whiteside pluton, or the 1.15 BYA Toxaway gneiss.  Instead, the mica-dominated dark minerals are generally scattered about in a random, salt-and-pepper fashion typical of classic granites, as shown in Figure 2.

Described in more detail on pages 17 – 18 of Whence These Special Places?, the Rabun stretches more than 25 miles from the Tuckasegee area, across the Lake Glenville dam and the northwestern edge of the Plateau, and into Rabun County, Georgia.  Its width is typically 1 – 2 miles.

The Bartram Trail crosses out of the AMS and onto the pluton at Jones Gap, and then out again into the AMS on the northwestern side of the pluton near the summit of Little Fishhawk Mountain.  Thus, our hike traversed the width of the pluton.

There are no meaningful rock exposures before reaching Jones Gap, where the trail begins to cross the pluton.  The terrain is heavily wooded and most of the trail is dirt, but stretches of very plutonic rock “pavement” pop up from time to time, confirming the nature of the underlying bedrock.  See Figure 3.  The pluton is also very much in evidence at an overlook south of Whiterock Gap — an area of exposed rock that rounds into a steep cliff and provides an excellent view of Whiterock Mountain, as seen in Figure 1.  From there, the trail includes intermittent stretches of pluton pavement past the side trail to Whiterock Mountain and its overlook (discussed below), and on along the trail to Little Fishhawk.  Somewhere before reaching Little Fishhawk you cross back into the AMS, but there is no dramatic transition.  Just a long stretch with no meaningful rock exposures and eventually, close to the summit, a few small exposures that are no longer pluton, one of which is shown in Figure 4.

The best exposure of AMS on this route is at the end — the summit of Fishhawk Mountain (elevation 4,748′).  The patch of rock, maybe 15′ by 40′, shows some jagged layered surfaces and a variety of rock types, and is distinctly different from the more smoothly rounded and homogenous Rabun pluton. 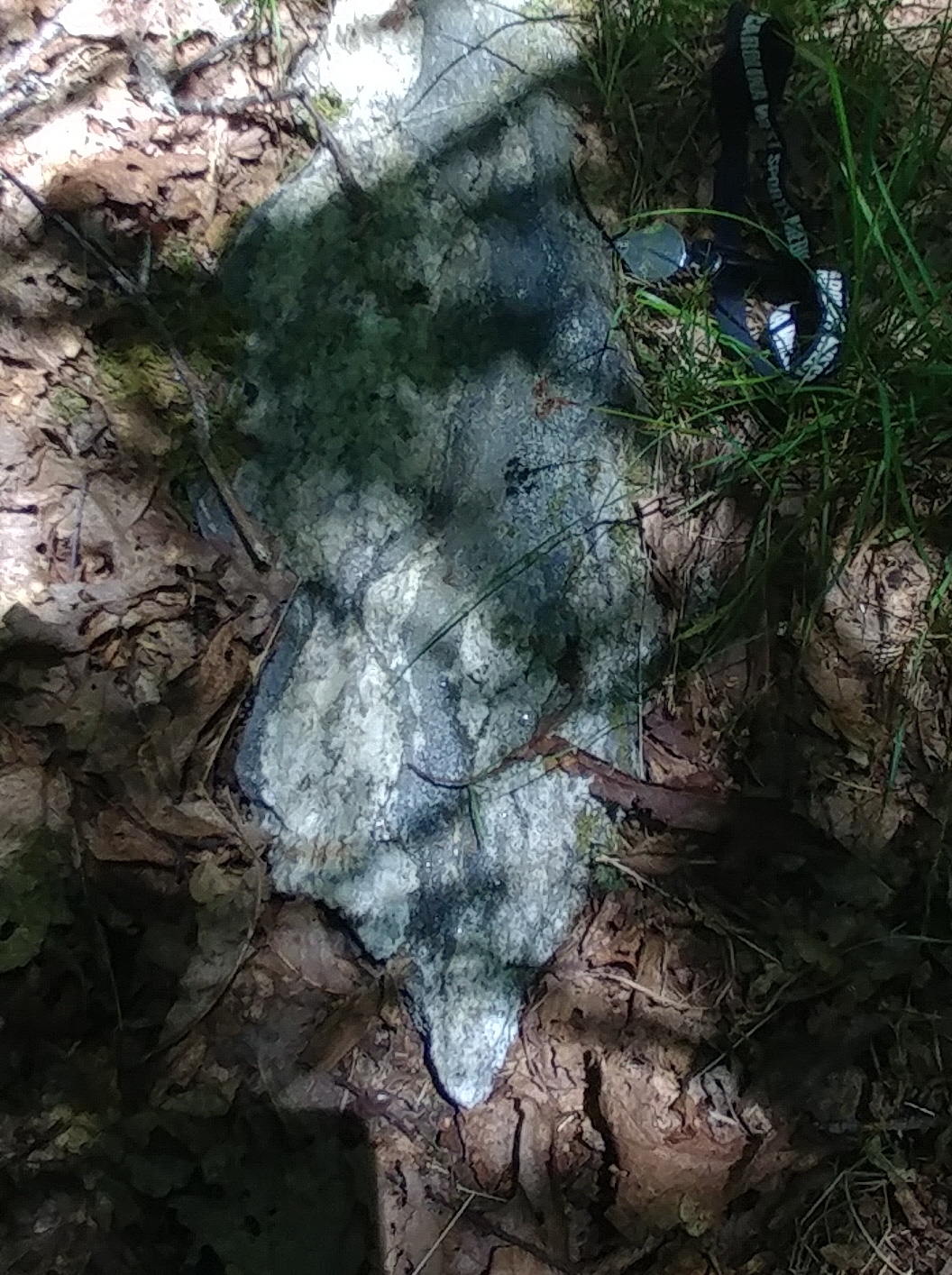 Figure 4.  One of the few small exposures of AMS that first appear near the summit of Little Fishhawk Mountain — unlike Rabun pluton (which formed from a fairly homogenous pool of magma), AMS typically displays ragged surfaces and a mixture of rock types. 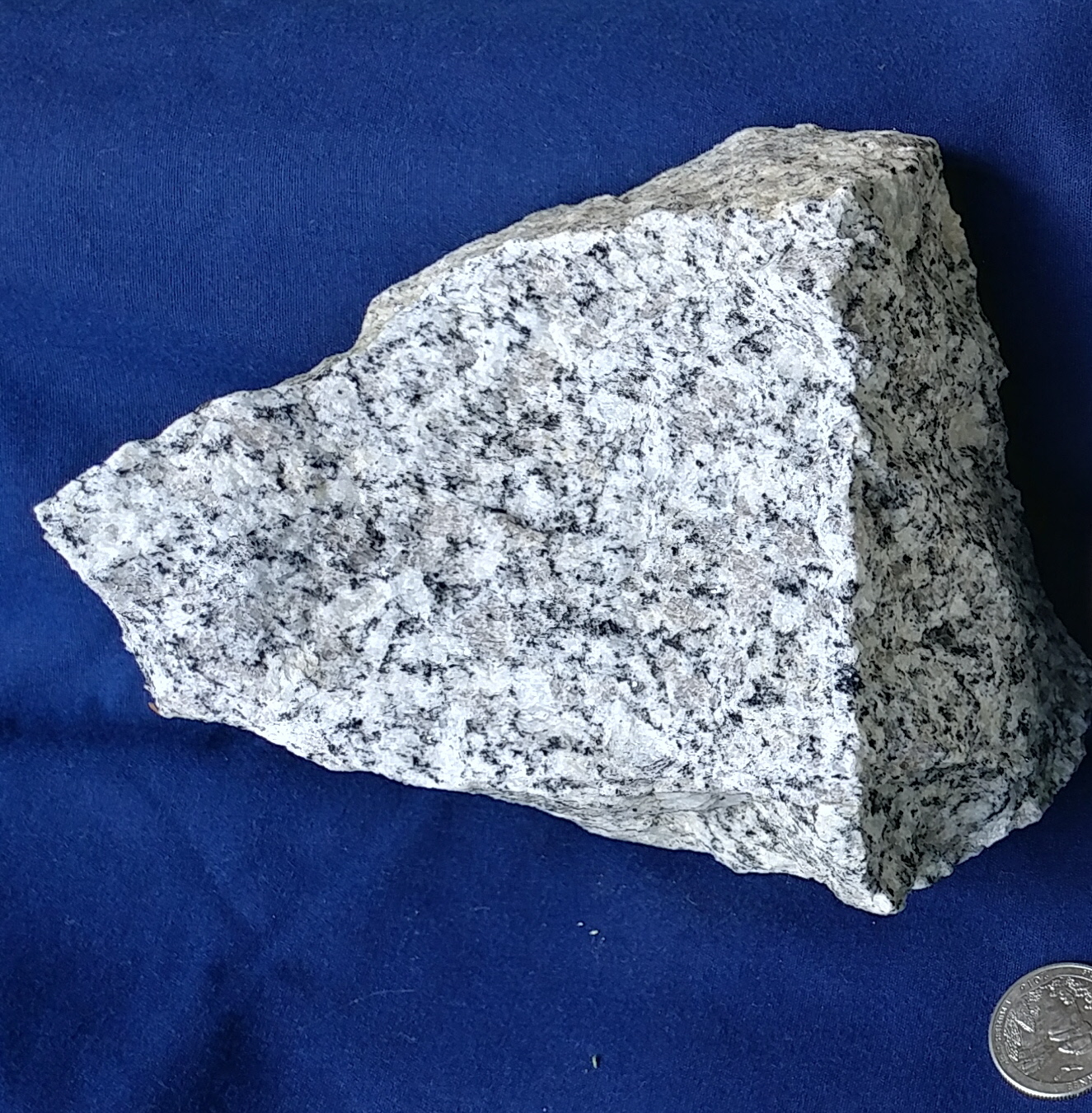 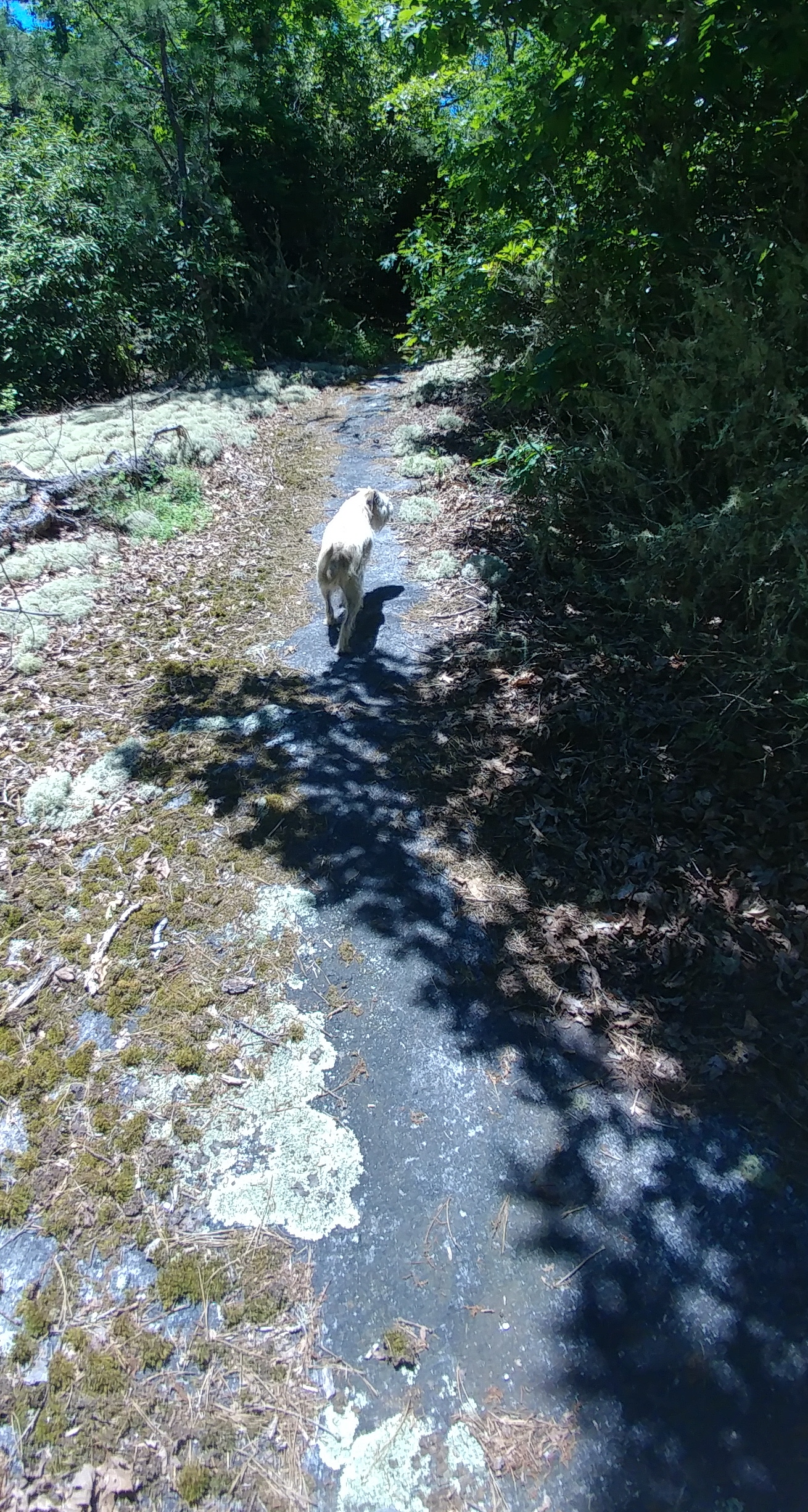 Figure 3.  Smooth plutonic “pavement” on the trail near Whiterock Gap. 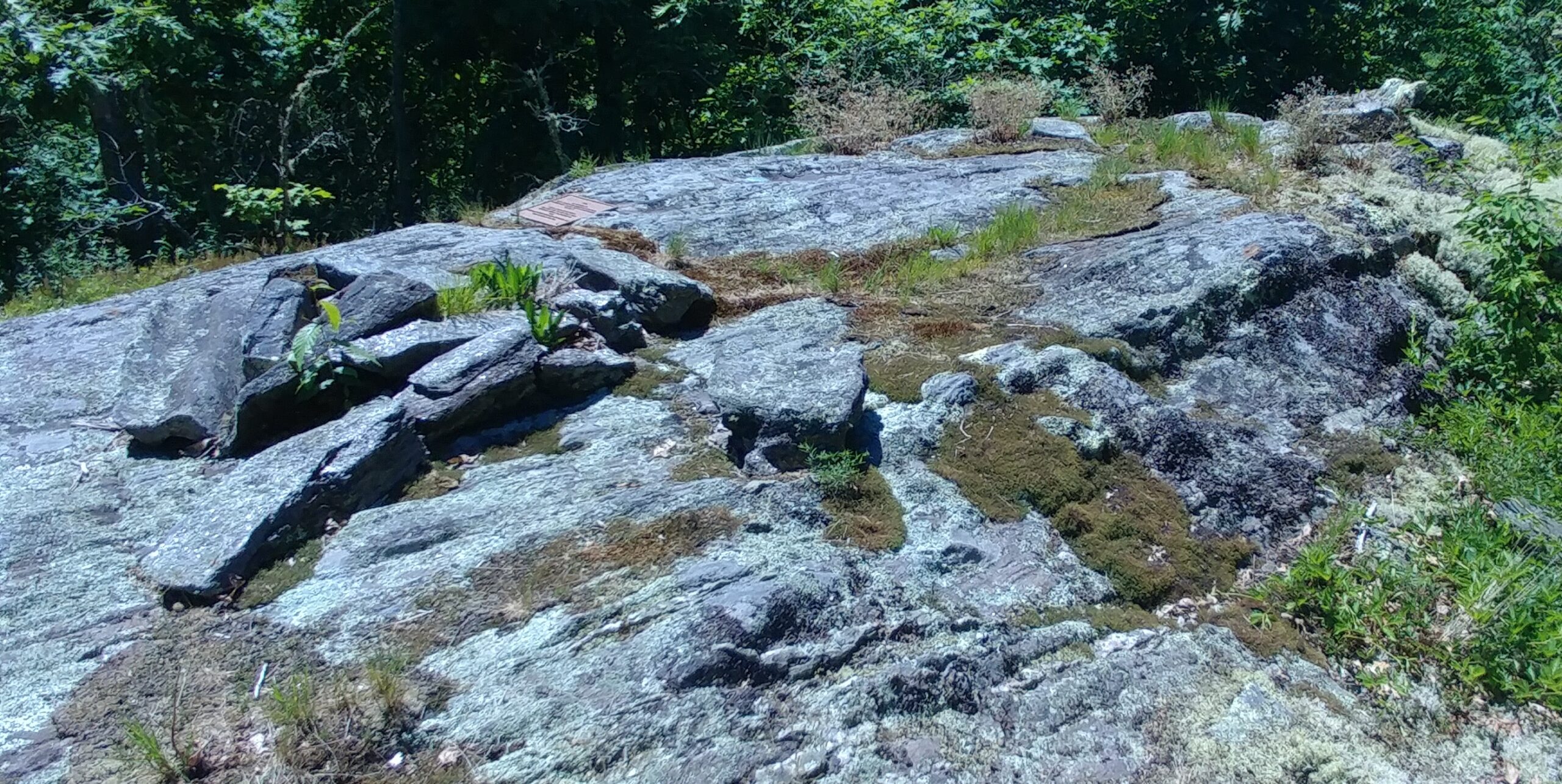 Figure 5.  AMS exposure at the summit of Fishhawk Mountain.  Compare its ragged surface with the smooth exfoliation surfaces on Whiterock Mountain (see Figures 6 and 7).

Whiterock Mountain (elevation ~ 4,500′) is a classic plutonic exfoliation dome.  (“Exfoliation” is a fracturing process characteristic of pluton exposures. It tends to create rounded dome-like mountains and smooth exposed surfaces, and is discussed in more detail on pages 37 – 39 of Whence These Special Places?).  Whiterock provides the most extensive exposures of the Rabun pluton that I have found on the Plateau, both on the steep open cliffs shown in Figure 1, and also across its rounded, forested summit (Figure 6).  The exposed southwest-facing cliffs create a wonderful overlook from their gentler upper slope (Figure 7), with views of the mountains along the western edge of the Plateau (Figure 8). 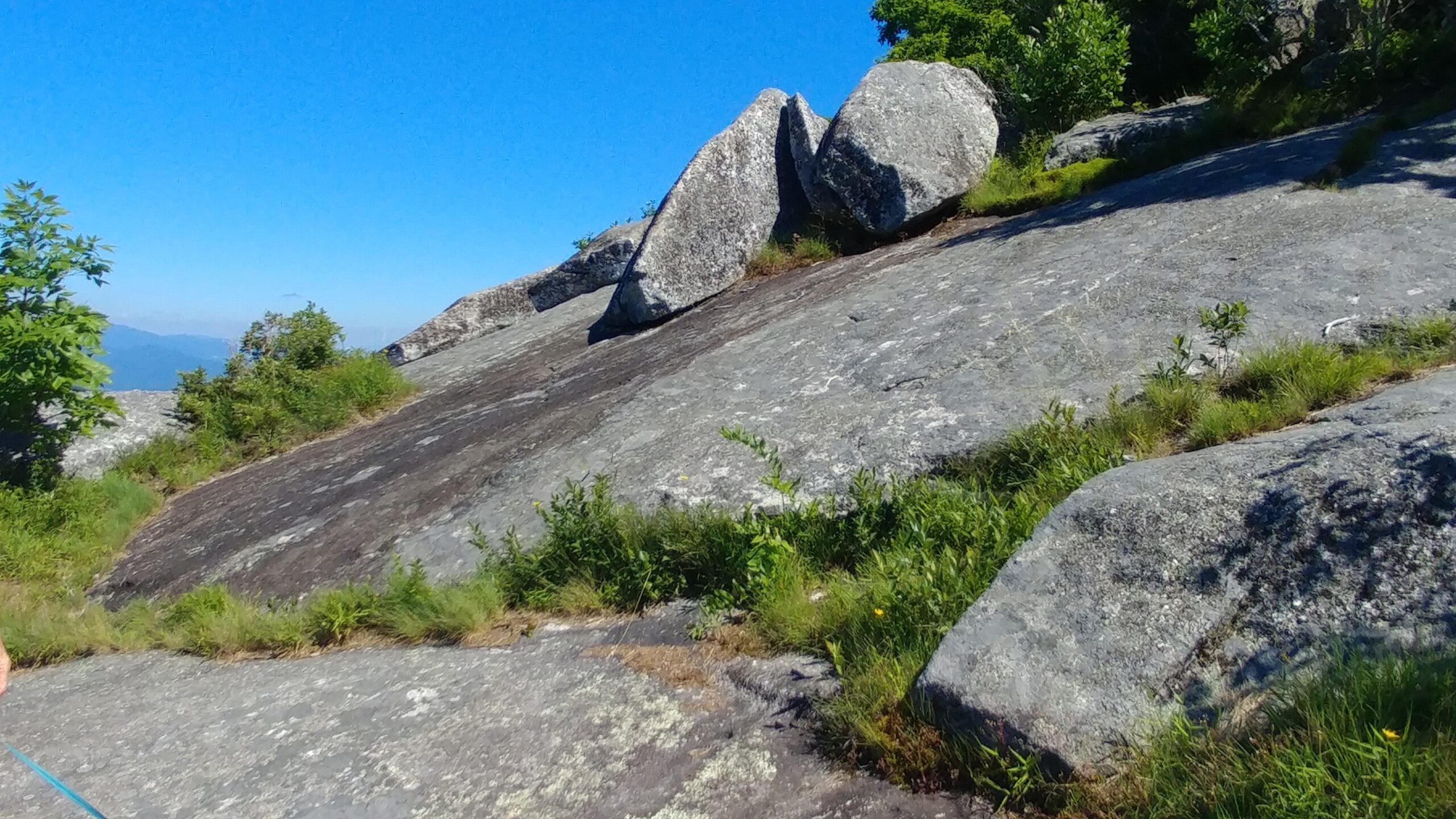 Figure 7.  Smooth exfoliated plutonic surface of Whiterock’s overlook, located at the top of the bare cliffs shown in Figure 1. 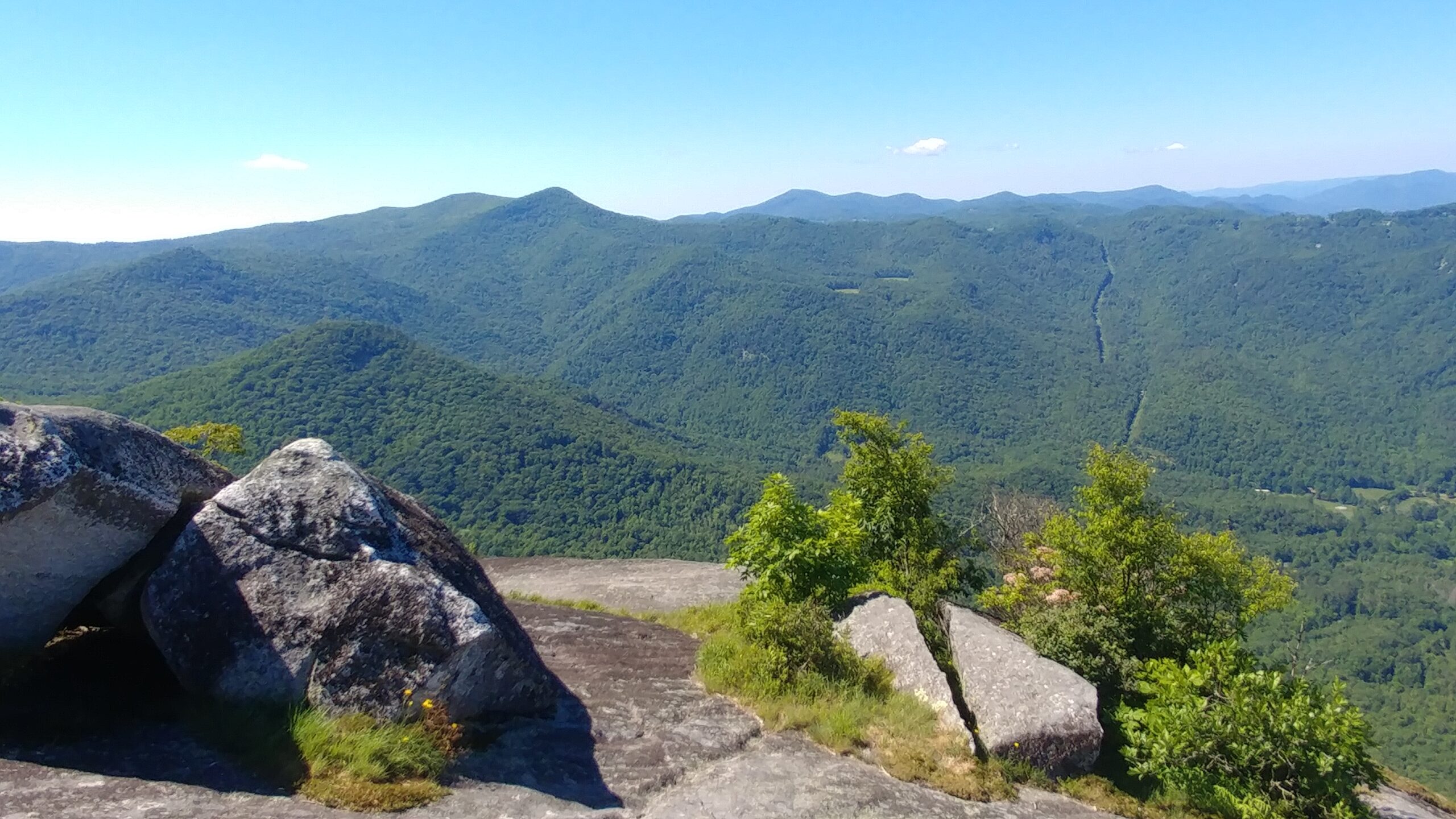 Figure 8.  Looking south from the Whiterock Mountain overlook.  The pointy peak center-left is part of Scaly Mountain, with the main Scaly summit behind and to its left.  Both are in AMS east of the Rabun pluton, as suggested by their sharp ridges and peak.  The largest background mountain at center is north Georgia’s Rabun Bald.

What’s in a Name?

I first got interested in Whiterock Mountain while researching Shining Rock (see pages 77 – 79 of Whence These Special Places?, and the <Shining Rock> link under the <Research & Resources> tab of this website).  I was surveying the region to see if I could find other formations similar to Shining Rock, and the name seemed to require some consideration.  Using a geologic map, Google Earth, and eyewitness descriptions, I quickly concluded that Whiterock Mountain definitely did not bear close kinship to Shining Rock, which is an AMS rock composed almost exclusively of small grains of pure quartz.

Aside from having attracted my attention, the name “Whiterock Mountain” is one more in a confusing array of white/black names for distinctive Plateau peaks, and there is little consistency in how the names apply to their particular mountains.  For example, both Whiterock Mountain and Blackrock Mountain in Horse Cove are plutonic exfoliation domes, while both Whiteside Mountain and Blackrock Mountain in Panthertown are mixed formations, with pluton topped by substantial caps of AMS.  What gives?  While I have no access to the thoughts of the early settlers who named our mountains, here’s my take based on the geology of those peaks :

Whiterock Mountain is probably named for the light color of freshly exposed pluton (see Figure 2 and the photo on page 38 — this and all further page references are to Whence These Special Places?), even though that color doesn’t really show up in the weathered exposed surfaces we see in the cliffs and across the summit (Figures 1, 6 and 7).  Perhaps at the time the mountain was named there had recently been a significant exfoliation event that exposed the rock’s native color.

Blackrock Mountain in Horse Cove, on the other hand, would seem to be named not for the native color of its plutonic rock (which is white), but rather for the mountain’s dark, heavily weathered and lichened exposed surfaces.  See Figure 9.

Blackrock Mountain in Panthertown (page 64) could have been named for the weathered pluton cliffs exposed on its lower face, or for the black AMS rock called aluminous mica schist (pictured on page 48), which is found along the ridge leading to the summit from the Salt Rock parking area.  Because I think the mica schist is an extraordinarily beautiful rock, I prefer the latter hypothesis, but have no supporting evidence for that preference.

Whiteside Mountain (pages 51 – 52) could, like Whiterock (and unlike its near neighbor, Horse Cove’s Blackrock Mountain), be named for the native color of the pluton that makes up its lower half.  But it could also be named for the white side formed by the high cliffs of its AMS upper half (Figure 10).  Because it’s Whiteside (and not Whitebottom?), I tend to go with the latter.

Black and white shouldn’t be so confusing! 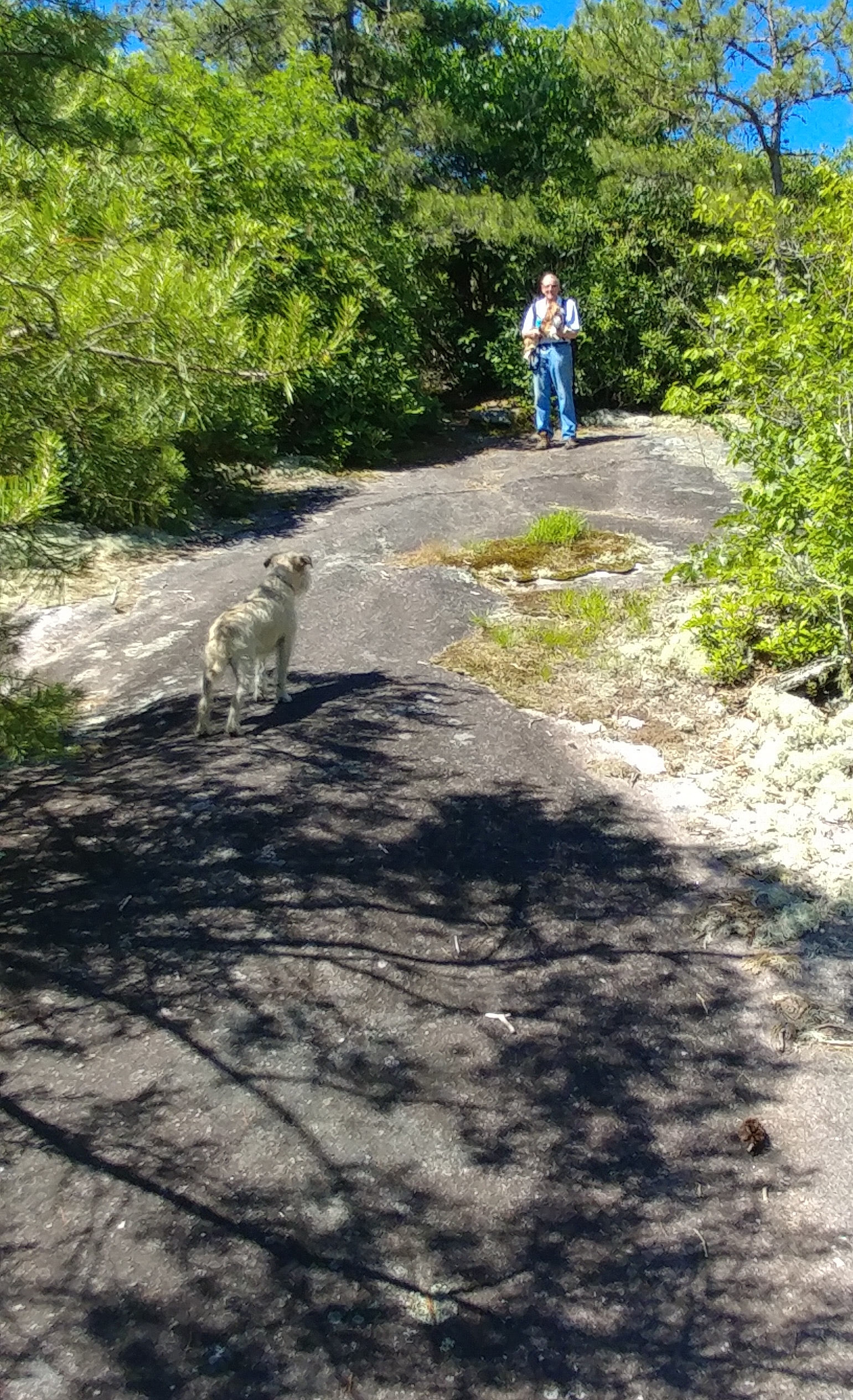 Figure 6.  Baron and our trail companions on the side trail across Whiterock to the overlook. 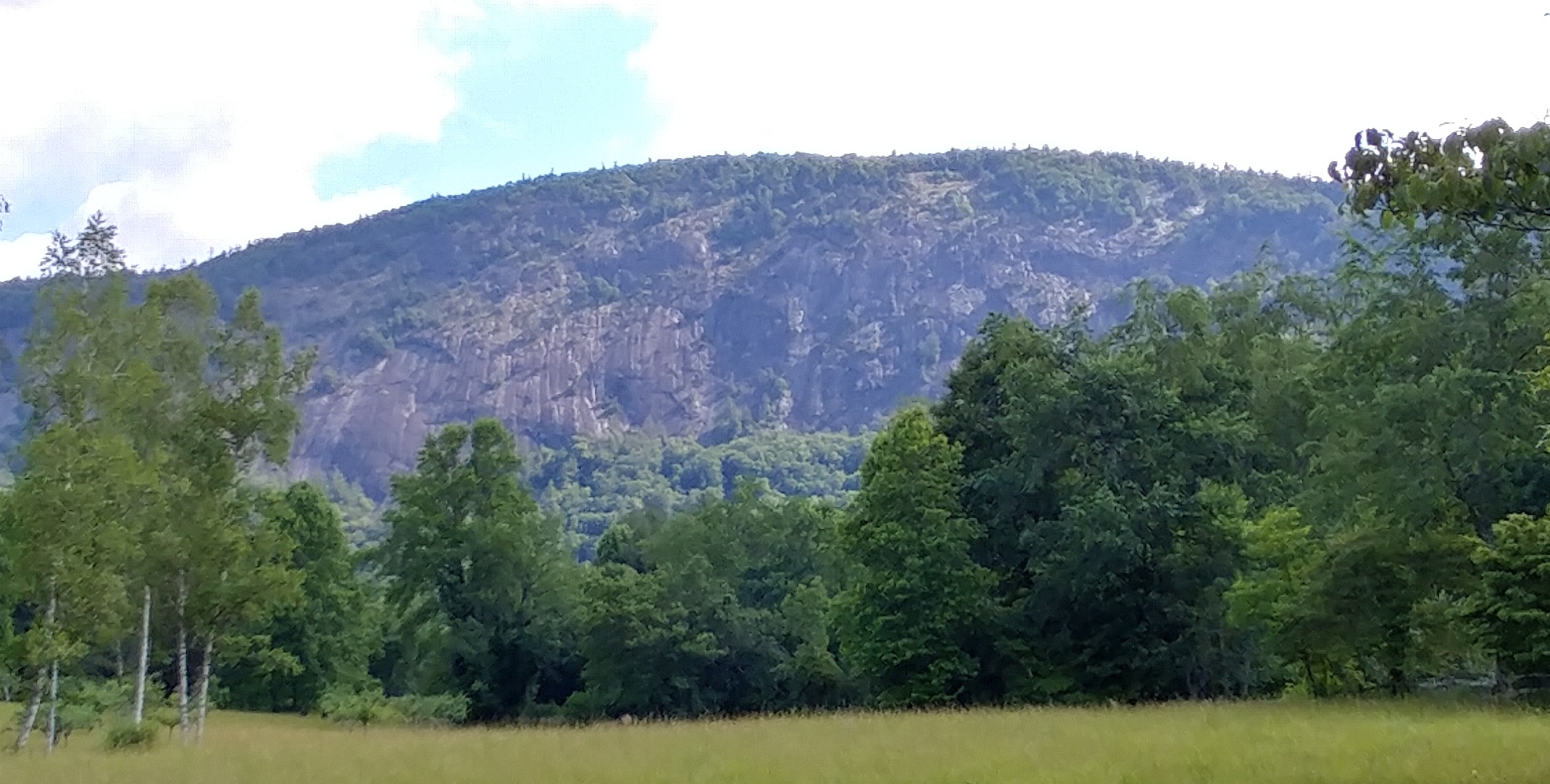 Figure 9.  The darkly weathered cliffs of Blackrock Mountain rising high above Horse Cove.  Less extensive but similarly weathered bare cliffs can be seen from Whiteside Cove, on the mountain’s opposite side. 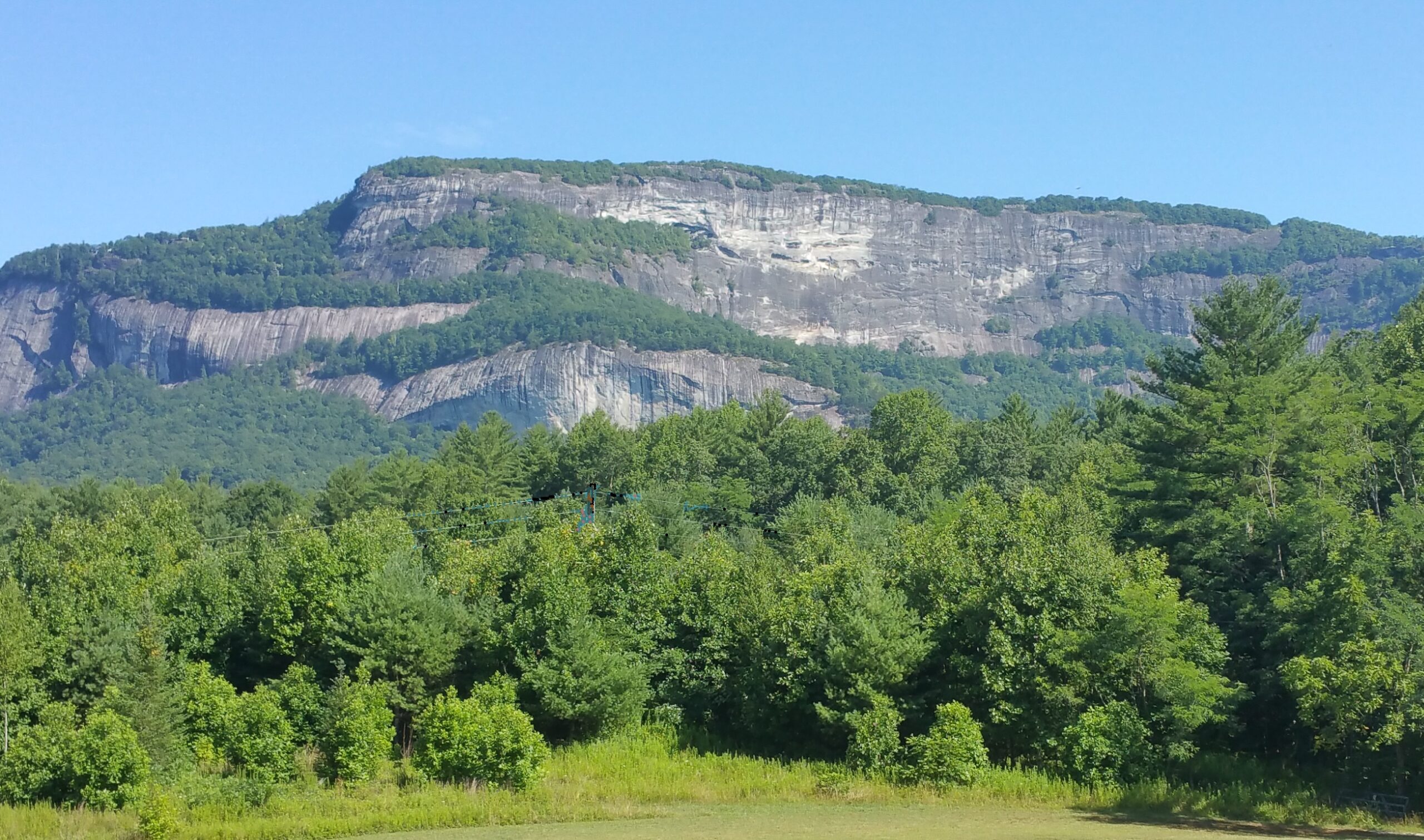 Figure 10.  The southern cliffs of Whiteside Mountain, as seen from Whiteside Cove.  The upper half, including the distinctly white section, is AMS, while the lower cliffs are weathered pluton.